Mrs. Bones and her neice have been invited to a big shindig. It's a family reunion celebrating an anniversary of some sort from what I can gather. Mrs. Bones and me stumbled upon each other at the second hand store (one of my favorite haunts). It was dark in there...and musty...and I was about to give up my search for the perfect skirt when around the corner comes Mrs. Bones wearing the most interesting hat. Well we struck up a conversation and apparently she was on her way to a party. She was just looking for something to perk up her dress.
What happened was, she had lost her invite to the party and couldn't remember the address so had been going around to all of the houses in the neighborhood where she thinks she remembers the party being 100 years ago, and nobody would help her. Luckily she came across the party when she heard her neice's voice laughing. But when she knocked on the door she realized that in her travels she'd mussed up her dress. So she came to the second hand store.
She told me a story about Bones' cousin who had the most beautiful wings that she'd ever seen. Apparently there is a wing rental place that give free flying lessons and instructions for special manoeuvering. Well I hope they have a nice party. 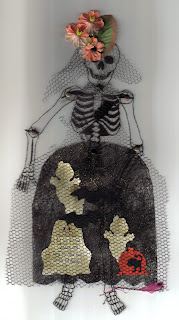 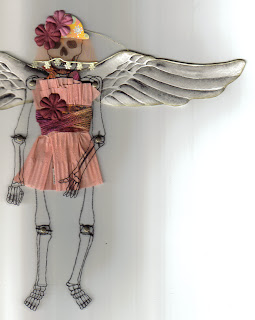