I've managed to fashion together a necklace from which hangs a medicine pouch with a third eye or inner eye motif embroidered on the muted olive coloured linen fabric chosen for this design idea. That was a sentence. 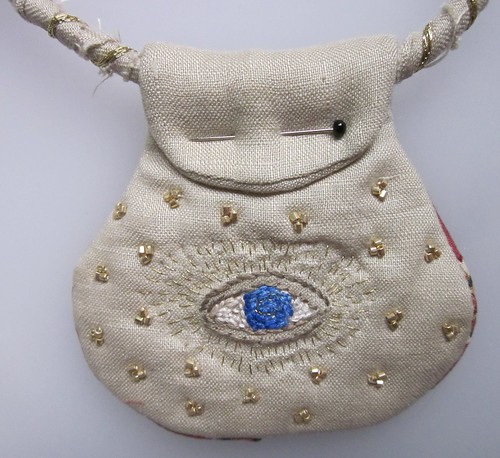 For some time I've been dreaming of making pouches to be used in a jewelry genre. Oh I dream up lots of ideas and get inspired by things I see on line, but it was not until the talented and lovely Susan gave us in the drawing challenge this week, the theme "Inner Eye" that I sprung into action. It's one thing to think of an idea and another thing completely to actually DO the idea. I did have an end game in mind for this piece, but the doing of it led me down a number of paths and on quite the learning curve. Let me say that I pieced this together to show you, and give you an idea of my idea. I will be making another one, using the lessons I learned in making this first one. I'll describe this one though: a linen wrapped cotton rope that has been overwrapped with a gold cord; and fastening with a closed loop on one end, and a button (not attached here.) From this rope hangs freely, a pouch of pale olive linen with a floral french cotton print backing. This has been padded using quilting batting and a third eye or inner eye has been embroidered on the front. Japanese glass seed beads have been added for a decorative element, and to tame the puffy quilting batting. Like I said, this was a learning curve. The bag is pinned to the hanging cord to show you the idea. Closure choices include snaps, and buttonholes with buttons, etc. The pouch opens to the inside at the back and a piece of tumbled tiger eye stone has been placed in the bag to be worn when one needs their third eye to be energized by the tiger eye stone. It is said that if you place a tiger eye on your third eye chakra (which is indigo in colour, and between your eyes on your forehead) you will energize and empower this energy centre in your body. I like the idea anyway. 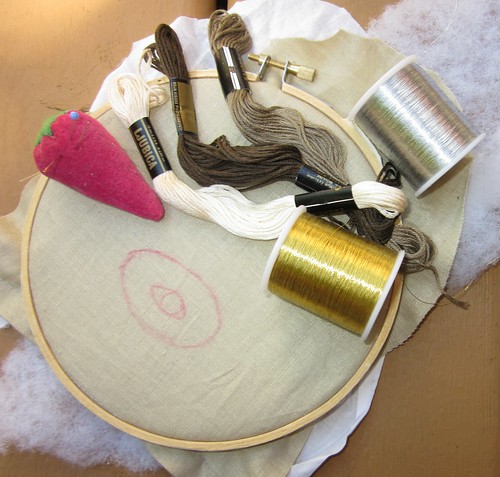 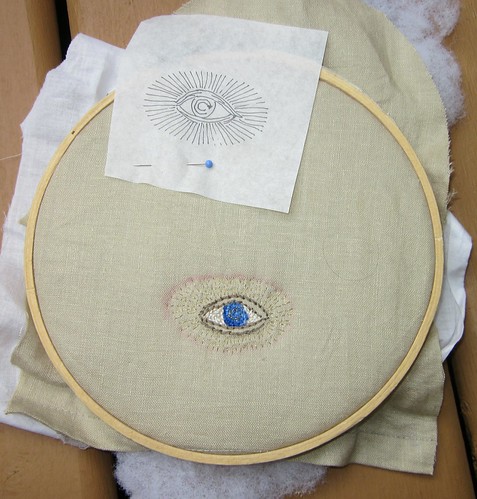 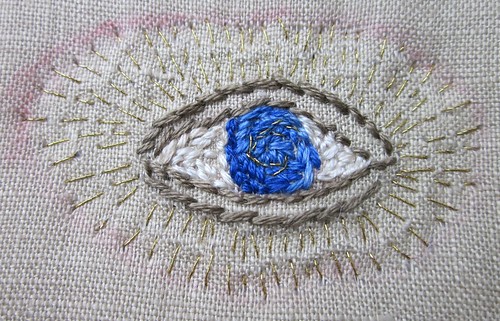 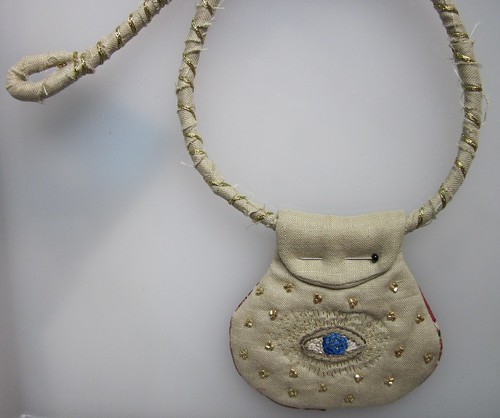 A few weeks ago I got a whole bag of tumbled tiger eye stones (there are 145 of them) that now sit in a brass singing bowl from India, on my meditation trunk and when I walk by them in the hallway, I sometimes just pick up one of them and place it on my third eye chakra, saying whatever comes to mind, and then tossing it back in the bowl of stones. I also got a bag of tumbled quartz crystals. Both of these bags of tumbled stones were say, $6.00 for all of them. One never knows what one is going to come across at Value Village (our local second hand store.) To see more "Inner Eye"s pop over to see Susan's blog where you will be linked to all of the players for this week. Thanks for dropping in! May you have singular wisdom and second sight from your third eye chakra. Namaste all!! Norma, xo
Posted by Unknown at 12:46 PM 12 comments: